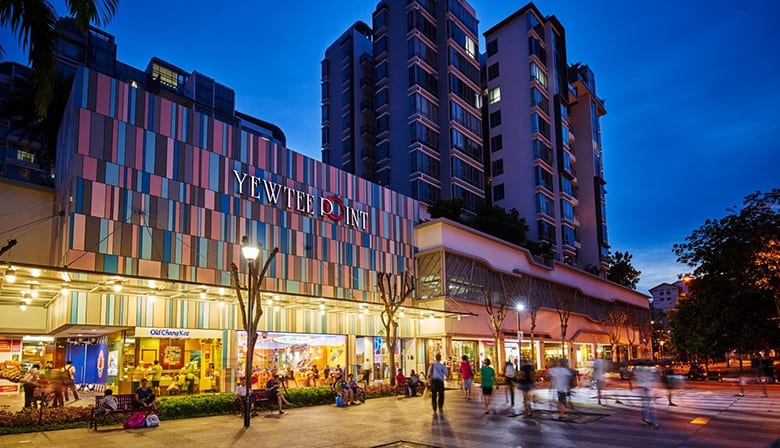 Frasers Centrepoint Trust said late Friday that it had agreed to sell the YewTee Point mall in western Singapore for S$220 million ($164 million), the latest in a string of divestments for the SGX-listed REIT.

In a press release, the trust’s manager said the sale of the community retail centre is expected to be completed on 28 May. The buyer was undisclosed but is understood to be Arch Capital, which is managing a fund on behalf of a German investor.

The deal would mark the third divestment of a shopping centre announced by FCT in the last seven months, after its sale of Bedok Point in eastern Singapore and Anchorpoint in the central region during the closing months of 2020.

The proposed disposal of the 99-year leasehold property is in line with a proactive management strategy to optimise FCT’s portfolio composition, the manager said, adding that it intends to use the proceeds to repay debt and lower FCT’s gearing level.

YewTee Point is 20 metres (66 feet) from Yew Tee MRT station and is frequented by local shoppers who rely on the Choa Chu Kang area mall for purchasing non-discretionary items such as groceries at the Fairprice supermarket that anchors the property. Other family-friendly tenants include Watsons, KFC, BreadTalk and Sushi Express. Like Bedok Point and Anchorpoint, YewTee Point is on the small side: a two-storey mall with 72,382 square feet (6,725 square metres) of net lettable area. Market observers say it makes sense for the REIT to sell the low-volume but profitable YewTee Point to focus on larger investments, such as the PGIM retail portfolio recently bought by FCT.

For illustrative purposes, if the sale of the heartland mall had closed on 1 October 2019, FCT’s distribution per unit for financial 2020 would have declined from 9.042 Singapore cents to 8.831, a 2.3 percent dilution, the manager said.

FCT had acquired the asset for S$125.65 million in 2010, with some 84 years now remaining on the leasehold. At the agreed compensation, the buyer would be paying the equivalent of just over S$3,039 per square foot of net lettable area for the retail asset.

With suburban retail offering attractive yields of more than 4 percent and confidence rising in the post-COVID recovery, good malls will be sought after by local and foreign investors, market sources say.

While FCT is selling off some of its smaller malls, the trust and its affiliates with Frasers Group have been actively acquiring suburban retail assets in recent years, including spending around S$1 billion in 2019 to buy a controlling stake in a PGIM retail real estate fund that owns a set of six Singapore shopping malls.

In 2020, Frasers Property followed up by purchasing AsiaMalls Management Pte Ltd, the property manager of the retail fund, from PGIM for an undisclosed amount.

Note: An earlier version of this story had identified Ho Chai Seng as chairman of the manager of FCT. The chairman of the trust’s manager is Dr Cheong Choong Kong. Also, the story has been updated to identify the buyer of the mall as Arch Capital, which is managing a fund on behalf of a German investor. An earlier version had named a fund managed by DWS. Mingtiandi regrets the errors.