The investors behind Universal Beijing Resort are said to be doubling down on the upcoming 300-acre theme park in the Chinese capital, with plans to invest $6.5 billion by its 2021 opening date.

The project initially had a budget of $3.25 billion when it was announced in October 2014 by Universal Parks & Resorts and its state-run development partner in China, Beijing Shouhuan Cultural Tourism Investment Co (BSH Investment). The Wall Street Journal revealed the expanded budget for the under-construction park last week, citing a person familiar with the matter.

According to the account, the success of Shanghai Disney Resort prompted the investors behind Universal Beijing to raise their bet. The Disney park in Shanghai drew over 11 million visitors in its first year after its opening in mid-2016. Disney made a major addition to the park by opening the Disney·Pixar Toy Story Land last month.

The new budget for Universal Beijing outstrips the more than $5.5 billion cost of its Shanghai rival and would mark the biggest-ever investment in a theme park. Universal and BSH Investment, a consortium of several Chinese firms, are now expecting the park in Beijing’s eastern suburb of Tongzhou to draw 10 million visitors in its first year, up from the initial projection of seven million.

“The Chinese market for entertainment and leisure is desperate for new attractions to complement the many historic and cultural attractions that China already has,” said Sam Crispin, founder of Crispins Property Investment Management and formerly director of the Real Estate Advisory & Urbanization Team with PwC China. “The market is largely domestic but the potential to attract overseas tourists is clearly there too,” he added. Work kicking off at the Universal Beijing Resort site in 2016

The extra investment in Universal Beijing will be used to expand the park’s retail and entertainment facilities, improve the attractions and build new zones including a Harry Potter-themed land. Attractions based on the Minions, Transformers, and Kung Fu Panda movie franchises are being built, capitalizing on the popularity of the series in China, according to the report.

The site of the park has been prepared, and major construction is expected to begin this year. Universal Beijing is reportedly slated to open in 2021, a year later than originally planned. Three years of talks followed the 2014 announcement of the project, with a joint venture being formed only last year, according to the source.

China’s amusement park market is expected to overtake that of the US in the next few years. Market revenue topped $6 billion last year, up 27 percent compared to 2016, and is projected to hit $14 billion by 2022, according to market research firm Mintel.

The spending power of Chinese consumers and their growing appetite for themed destinations is drawing a wave of investment in the mainland market, where more than 60 such projects are under development. Besides Universal and Disney, international players that have entered the fray include Discovery, Inc — which opened the world’s first Discovery Adventures Park in 2016 in the Moganshan resort area of eastern China’s Zhejiang province in 2016 — and Six Flags, which plans to open a theme park in Haiyan County in the same province next year.

Six Flags, which is working with China’s Riverside Investment Group, has also revealed plans for a potential second theme park in Chongqing. Homegrown investors also see opportunity in the sector, with China Evergrande Group announcing plans last year to augment its tourism portfolio with 15 “Children’s World” theme parks across the country, adding to an existing project in the city of Changsha.

More Fun Than the Market Can Bear? 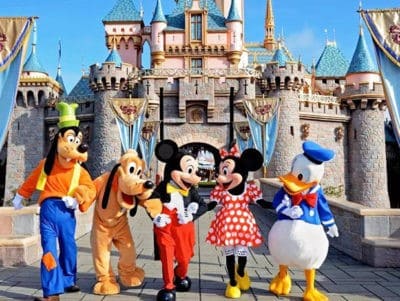 Fun-seeking Chinese have made Shanghai Disney Resort a success

Crispin commented that he sees ample room in the market for all those theme parks. “There will inevitably be short term changes in visitor patterns every time a new park opens, but then the pendulum swings back again and numbers balance out,” he said.