ESR Ichikawa is the developer’s largest operating facility in Japan

Hong Kong-listed ESR is about to become the largest real estate fund manager in Asia Pacific as the industrial real estate specialist today announced an agreement to acquire ARA Asset Management for $5.2 billion.

ESR together with ARA announced the deal to purchase 100 percent of the equity in the Singapore-based fund manager, with ESR chairman Jeffrey Perlman emphasising the opportunity to create the most powerful new economy real estate platform in Asia Pacific.

“Our vision has always been to build a leading fund manager focused on technology-enabled real estate, especially logistics and more recently data centres, on the back of major secular trends including the rapid rise of e-commerce, digital transformation and the financialisation of real estate in Asia Pacific,” Perlman said. “With the acquisition of ARA, we are very excited to bring two best-in-class businesses together to form Asia Pacific’s number one real asset fund manager powered by the leading New Economy platform.”

Aiming at the New Economy

The deal creates a company with combined assets under management of $129 billion, with ESR co-founder Stuart Gibson pointing out in a presentation to investors that this will make ESR the third-largest publicly listed real estate investment manager globally, after Blackstone and Brookfield. With ARA’s Asia Pacific real estate assets under management ranked tops in the region last year at $66.9 billion, following the merger the new supersized ESR will rank seventh among all property fund managers globally, just behind America’s Nuveen and ahead of AXA Investment Managers Real Assets of France. ESR is acquiring ARA at less than 20 times the Singapore company’s most recent earnings before interest, tax, depreciation and amortisation (EBITDA), which Perlman characterised as affordable in the context of other recent acquisitions.

Perlman made clear that the opportunity to create the leading logistics and data centre platform in Asia Pacific is central to the transaction as he pointed to the advantages of aligning with the growth of tech-driven sectors of the economy. “We are currently witnessing a ‘once in a generation’ change in real estate where leading global investors are seeking to rebalance their portfolios by divesting institutional quality assets in order to redeploy that capital back into New Economy real estate where they have been meaningfully underweight,” Perlman said.

“For close to two decades, ARA has established itself as a leading real asset manager with a successful track record across geographies, asset classes and strategies through multiple market cycles,” said ARA co-founder John Lim. “We look forward to partnering with the ESR team, whose expertise, dedication and vision have led to building the region’s leading logistics real estate platform, and we can now together provide investors with a full suite of products with an outsized contribution from New Economy real estate.” 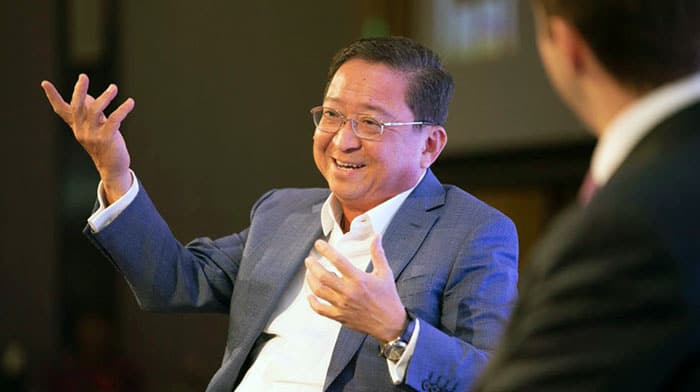 Lim, along with a representative of Li Ka-shing’s CK Asset Holdings (which was among ARA’s original backers) and a nominee from Sumitomo Mitsui Banking Corporation, will be appointed to ESR’s board of directors as part of the deal.

“We really think we have the dream team for management of real estate in Asia today,” Perlman said, with the company top managers committed to working together post-merger. Following closing of the transaction, which is subject to ESR shareholder approval, Lim would be committed to staying with the new company for at least 36 months as a senior advisor and board member.

Gibson and Shen will continue to serve as co-CEOs of ESR, and ARA chief executive Moses Song will be staying around to run the Singapore company’s day-to-day business, according to Perlman. Logos co-founders Trent Iliffe and John Marsh will operate their own slice of the ESR industrial empire.

Less than a year and a half after ARA acquired a controlling stake in Logos Property, the Sydney-based industrial player has a major role in this deal.

Nearly a quarter of ESR’s presentation to investors was devoted to Logos, which currently has $17 billion in assets under management and a portfolio of industrial properties covering 8.9 million square metres (95.8 million square feet) by gross floor area.

The Logos portfolio would boost ESR’s gross floor area of 20.1 million square metres by more than 44 percent, while also adding to its nearly $34 billion in assets under management.

The deal would make the enlarged ESR the largest player in Asia Pacific logistics, with a combined $50.5 billion in assets under management, compared with GLP’s $49.9 billion, according to the company’s figures.

Data Centres on the Rise

With both ESR and Logos having introduced their first data centre projects this year, the combined company has set a goal of becoming Asia Pacific’s top provider of rack space. ESR announced its first data centre in Osaka in April

In April of this year, ESR purchased an Osaka site for a data centre project, and it also has a Hong Kong project in the pipeline. Logos kicked off its server facility efforts in Jakarta during June, with plans to expand that footprint regionally. The merged entity will have a pipeline of 1,200 megawatts of data centres across eight countries in Asia Pacific, according to the investor presentation.

Logos is also in the process of establishing a renewable energy infrastructure fund, with the company having recently established a partnership with Engie of France to produce solar power from the rooftops of its Asia Pacific industrial portfolio.

ESR would be primarily paying for ARA through stock, including issuing 1.4 billion new shares in the company, which will be equal to 46.5 percent of its current shares outstanding. Japan’s Sumitomo Mitsui Banking Corporation is acting as a strategic partner in the deal, which includes subscribing to a $250 million placement of ESR shares at HK$25.35 per share.

ESR’s founders, along with investors OMERS and JD.com, which together comprise all of the shareholders represented directly on ESR’s board and stand for a combined 46 percent of the company’s shares, have all provided irrevocable undertakings to vote in favour of the merger.

In addition to serving as chairman of ESR, as a managing director and head of Southeast Asia for Warburg Pincus, Perlman is also a director of ARA. In May of last year, Warburg Pincus raised its shared in ARA to 48.7 percent.

The US private equity firm also co-founded ESR in 2011 through its participation in e-Shang, but exited the company following its $1.6 billion IPO in 2019.