Singapore-listed real estate investment trust Suntec REIT has agreed to acquire its fourth Australian commercial property, an office project in the Sydney tech hub of Pyrmont, for A$297 million ($208 million), according to an announcement to the stock exchange.

The announcement from the REIT’s manager, ARA Trust Management Ltd, revealed that Suntec will be acquiring 21 Harris Street, a 203,400 square foot (18,896 square metres by net lettable area) commercial project, from local developer Milligan Group, as its third office property in the city.

ARA Trust Management, which is a subsidiary of Warburg Pincus-backed ARA Asset Management, said that the investment was an opportunity to increase the trust’s returns to investors as Sydney’s tech and media tenants continue to target the Pyrmont area.

Moving in Early at Downtown’s Fringe

Suntec REIT is purchasing the project, which is scheduled to come on line in the first quarter of 2020, through a put and call option deed tied to the completion of the project, and its occupation by Publicis Group, which has signed on as the anchor tenant. 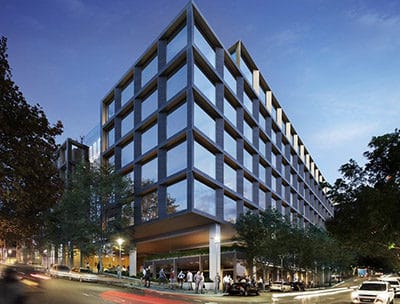 21 Harris Street is scheduled for completion in Q1 2020

The REIT will take over 100 percent of the equity of the project with the acquisition price equating to A$1,460 per square foot of net lettable area. 21 Harris Street, which has 21,500 square feet of retail space in addition to 181,900 square feet of office space, is already 91.2 percent leased according to documents filed by ARA, with Hong Kong-based co-working operator Campfire also among the tenants pre-committing to the building.

Under the terms of the agreement, ARA will, upon completion of the project, pay Milligan a development fee of A$178 million, with the Aussie builder also obligated to provide a rental guarantee for three years following completion at a 5.5 percent capitalisation rate based on market rents. Milligan had developed the nine-storey office block with support from financial backers Quintet Partners and Stamford Capital, according to local media reports.

In an investor presentation announcing the acquisition, ARA highlighted the 5.5 percent yield (by net property income) for the freehold property, as compared to the current 4.5 percent average for Sydney’s core CBD.

The firm headed by Singaporean investor John Lim expects to fund the acquisition through a combination of Australian dollar debt and equity.

ARA also pointed to the project’s connectivity to the city centre and the momentum provided by major occupiers such as Google, Paramount Pictures and Thomson Reuters moving their offices to Pyrmont, as supporting future income at 21 Harris Street.

Current net rental rates in the Pyrmont submarket have risen above A$750 per square metre per year, according to agency figures, with ARA predicting annual rent escalation of from 3 to 4 percent for the area, as Sydney’s core CBD area continues to experience vacancy levels in the low single digits.

Suntec Expands Down Under

The Pyrmont acquisition comes nearly two years after Suntec REIT’s most recent prior deal in Australia, when it purchased a 50 percent stake in 477 Collins Street in Melbourne for A$417 million.

Following the acquisition from Milligan, the REIT, which is anchored by its set of office, retail and convention centre properties at Suntec City in Singapore, will own stakes in approximately 2.36 million square feet of commercial space in Australia.

In addition to 21 Harris Street and 477 Collins Street, the listed trust also owns a 50 percent stake in Sydney’s 816,000 square foot Southgate Complex and a 100 percent interest in 177 Pacific Highway in the city.