A Chinese developer has decided to fit a waterfall outside a new skyscraper in the country’s southwestern province of Guizhou to the amusement of locals, but not everyone is impressed.

A video showing the 108-metre artificial waterfall flowing from a 121-metre tall hotel at Liebian International Plaza in the province’s capital Guiyang city has recently gone viral on the Internet. A spokesperson for developer Guizhou Ludi Real Estate, which invested a total of RMB 600 million ($87.88 million) in the project, told the media that the water feature had made it Guizhou’s only waterfall building and the world’s tallest waterfall.

The length of the cascade on the Guizhou commercial building is three metres longer than the previous title-holder for tallest waterfall on the front of a building, Rio de Janeiro’s Solar City Tower in Brazil.

The engineer responsible for the installation, surnamed Li, told the media that the design had been made because “we all love water here” and that it could act as the popular summer resort city’s “water-sprinkling attraction”. “With a bit of mist in the air during summer, the weather would be much cooler,” he added.

Nevertheless, the new landmark comes with a price. Having to pump the water from the reservoir all the way from the building’s basement to the top of the waterfall takes two hours of prep time and is powered by four 185-kilowatt pumps, costing at least RMB 800 in electricity fee for an hour-long showcase.

Not All of Us Love Water

While the developer set out to create a Guizhou landmark, the waterfall building has quickly caught the attention of China’s netizens nationwide.

“Which pipe has burst? It must be a massive one,” a netizen said, while another added that, “The only good thing about it is that there’s no need to hire window washers”. While some have commented that the design was a waste of water and electricity, others simply thought it was “stupid”.

In response to the criticism, Ludi’s spokesperson, surnamed Cheng, told local media that, “We use recycled water from rain and other channels. The water runs in a circular system and would be used over and over again. Meanwhile, the power consumption is not big as we would only turn it on during special events, for about 10 to 20 minutes”.

In 2014, the nation’s president Xi Jinping called for an end to the “weird buildings” being built in the country as China’s architectural ideas were going wild. A 10-storey hotel in the northern Chinese province of Hebei has the design of three giant Chinese gods – Fu, Lu and Shou – standing side by side in the middle of Sanhe City to give their blessings to the local residents.

In Anhui, an eastern region of the country, the Hefei University of Technology has became famous after its architecture students designed a building that resembles a violin leaning against a bricks and mortar grand piano. And along the shores of Yangcheng Lake in the Jiangsu provincial city of Kunshan designers decided to celebrate the town’s famous hairy crabs with their own crustacean-inspired structure. 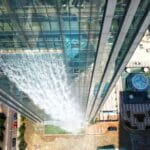