Tokyo has emerged as the top Asia Pacific city by property investment prospects in 2022, muscling aside second-place Singapore after the city-state took the honour the last two years in a row, according to a report released this week.

Hong Kong, meanwhile, saw its standing improve as it moved up to the 14th spot after finishing rock bottom among 22 key cities for two years running, said the nonprofit Urban Land Institute, which issued the report with PwC.

Sydney, Melbourne and Seoul rounded out the top five as investors continue to embrace markets characterised by stability, abundant core capital and a flight-to-safety approach, said ULI, which polled 233 real estate professionals in the region.

“Asia Pacific’s real estate market is seeing a new cycle of growth and investment as the region begins to shake off the challenges of the pandemic,” David Faulkner, president of ULI Asia Pacific, said in a release. “At the same time, post-COVID-19 secular trends such as remote working, reduced travel and increased online shopping have brought immense structural changes to the industry in its wake.” David Faulkner of the ULI

Japan’s capital is no stranger to the top tier, having placed first or second no fewer than six times over the last decade in ULI’s survey. The city’s enduring appeal stems from a stable economy, a deep and liquid market, resilient asset values and a long track record of better-than-expected returns, according to the report.

“For European investors, they look at where residential pricing is in Europe and think that even at 2.5 or 2.75 cap rates, residential looks pretty attractive in Japan, particularly given borrowing costs,” said a Tokyo-based fund manager who spoke to ULI.

Second-ranked Singapore has seen a strong rebound in transactions in 2021 after a lacklustre 2020, with office prices especially strong as they hit record highs for Grade A properties. 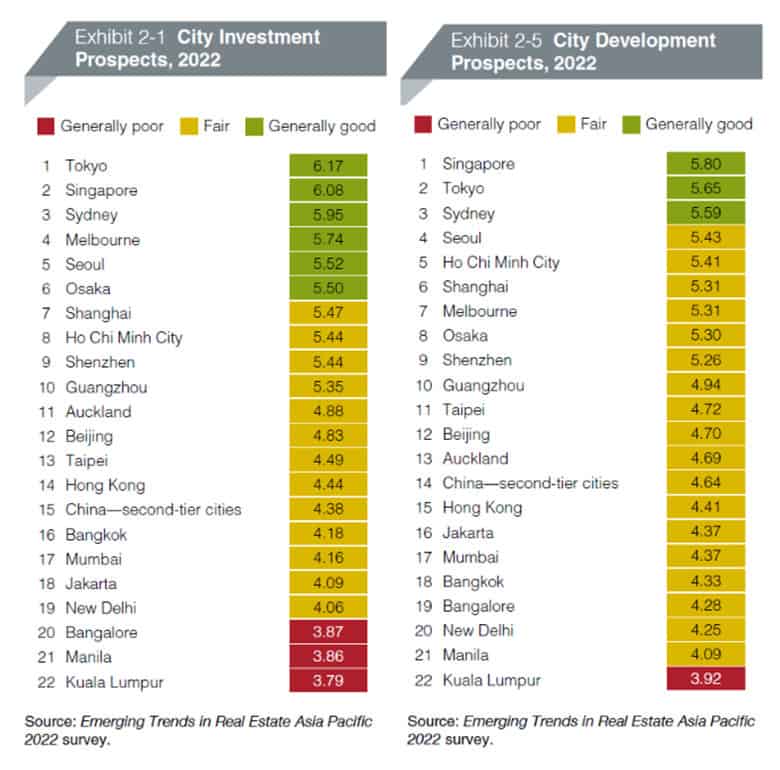 Buying sentiment in the Lion City has been boosted by supply-shortage expectations, due to a limited near-term pipeline of new development sites, the withdrawal of stock from the market for redevelopment purposes, and a belief that Singapore may gain from companies relocating from Hong Kong.

According to survey respondents, Singapore is the only Asia Pacific city expected to have higher office rents in 2022.

Hong Kong’s eight-spot leap up the league table is likely down to the general view that the worst is over for the city’s markets after the twin shocks of social instability and pandemic-induced declines in commercial asset values, ULI said.

New occupiers from mainland China are tipped to arrive in the city when the border reopens, but sentiment among international companies has been damaged by concerns over the political situation and Hong Kong’s strict pandemic policies, which have curtailed travel to and from one of Asia’s busiest commercial hubs.

Hong Kong’s improvement this year cleared space at the bottom of the table for the region’s developing markets, which continue to suffer high rates of COVID-19 cases. Kuala Lumpur placed dead last, edged out by Bangalore and Manila.

“The expectation is we’re going to get out of this down cycle pretty soon, but from the perspective of foreign investors we’re not yet on the radar,” said a Manila-based analyst. “If you look at neighbouring countries, a lot of them are already talking about moving into the recovery phase, and their fundamentals are now back in terms of occupier demand. But from where we are at the moment, I don’t see a lot of them on the horizon.”