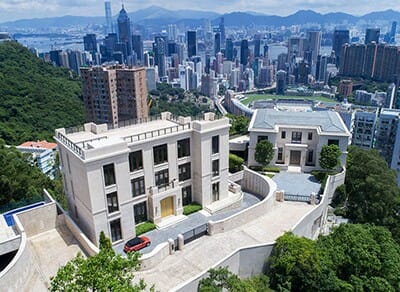 No 16 at Mount Nicolson has sold for HK$720 million

A house at Mount Nicholson, a high-end development at Hong Kong’s Jardine’s Lookout, has been sold for HK$720 million ($91.73 million), according to local media accounts.

The sale of the house No 16 at Mount Nicholson, which is changing hands at HK$90,248 per square foot, comes nearly four months after an earlier buyer had forfeited a HK$36 million deposit to walk away from a contract to purchase the home in December last year.

Despite a recent surge in activity in Hong Kong’s mainstream residential market, the luxury property sale comes at a price a fraction of a percentage point less than the HK$90,484 per square foot that the previous buyer had agreed to pay last year.

And with seller Wheelock & Company, which developed Mount Nicholson together with privately held Nan Fung Group, offering some unusually generous terms, the Peak sale could indicate that the city’s most expensive location has not yet felt the same upswing that has moved homes in other parts of Hong Kong.

New Buyer Given One Year to Pay Up

The transaction price for the 7,978 square foot luxury villa is at a price RMB 1.88 million less than the HK$721.88 million that the buyer had agreed to pay in last year’s cancelled sale, and the new deal allows for the transaction to be completed in a year’s time, compared to the 30 days afforded to buyers of other homes sold in the project. In January this year, an anonymous Hong Kong identity card holder abandoned the contract for the home, along with his or her deposit of HK$36 million, as concerns grew over the outlook for the city’s housing market in 2019 as the US Federal Reserve appeared to be considering raising interest rates and liquidity dried up in mainland China.

With the Hong Kong’s housing market enduring a rare downturn late last year and into the period before Lunar New Year, the home, which includes  a pair of private gardens of 5,163 square feet and 1,281 square feet each, a 982 square foot rooftop terrace and a swimming pool had remained on the market during the housing lull.

Buying into An Elite Location

The new owner of No 16 at Mount Nicholson, who has not been identified, will be joining some lofty company on the side of Hong Kong’s highest hill.

Longfor Properties co-founder and Junson Capital boss Cai Kui paid HK$151,785 per square foot and a total of HK$1.4 billion for a nearly identical house next door at No 17 in April last year, making it the most expensive home ever sold in Hong Kong by unit of area.

In addition to Cai, other mainland buyers have targetted homes in Mount Nicholson with Lin Zhongmin, chairman of Shenzhen-based developer Chunan Group and Zhu Xingliang, founder of Suzhou Gold Mantis Construction Decoration, both having purchased apartments there within the last 22 months.

Landmark sales of luxury properties appear to be bouncing back in Hong Kong as buyer attitudes towards the property market has taken a U-turn.

The city’s property market has witnessed a stronger-than-expected recovery in the last two months, as the US federal reserve backs away from the idea of future interest rate hikes, which means Hong Kong mortgage holders should also be spared any upswings in bank rates.

Repulse Bay was also the site of a recent HK$43.8 million deal for a 1,113 square foot apartment at The Brentwood development, which sold for the equivalent of HK$39,353 per square foot. In August of last year, a similar unit in the same property sold for HK$42.98 million — about HK$820,000 less than the latest sale, which is five floors lower in the building.