Wang Jianlin’s Dalian Wanda Group has agreed to sell off the last two assets it what once was a $5 billion overseas real estate portfolio, according to reports in the US media. A deal reported today to dispose of projects in Los Angeles and Chicago appears to close a chapter in the global ambitions of a tycoon who once ranked as China’s richest man.

Triple Five Group, the Edmonton-based developer of Minnesota’s Mall of America, has signed a contract with Wanda to acquire the $1.2 billion One Beverly Hills project in California, according to an account published, but later deleted, on US real estate site CoStar.

Financial details of the disposal were not disclosed, but Wanda is said to have been asking $400 million for the project, after originally purchasing the site of the former Robinson’s-May Beverly Hills store on Wilshire Boulevard in 2014. The site is approved for construction of a five star hotel and luxury residential development.

The CoStar report cited a source familiar with the agreement as saying that Triple Five had also agreed to purchase a 60 percent stake in Wanda’s Vista Tower project in Chicago, which is under construction by the city’s Magellan Development.

The Chinese developer purchased a 90 percent stake in the 350-metre tall mixed-use project in Chicago’s Lakeshore East area in 2014. The agreement between Triple Five, which is controlled by Canada’s Ghermezian family, and Wanda is said to be due to close next month. 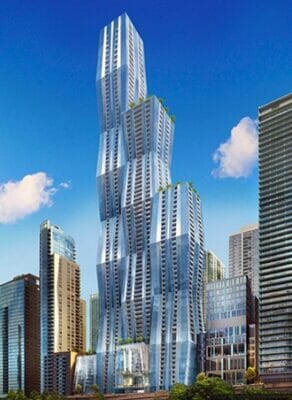 The reported real estate deal came only days after the property-to-entertainment conglomerate handed over a stake in AMC Entertainment for $600 million to private equity firm Silver Lake. Wanda group, which was once one of China’s most aggressive cross-border investors, has been quickly closing out its overseas portfolio since last year following the Chinese government’s crackdown on outbound capital flows.

Wanda put its five-project, $5 billion overseas property portfolio up for sale last November, and disposed of its pair of Australian developments in January of this year. Once the Triple Five deal closes, the Beijing-based group will have officially sold its interest in each of the five properties.

Wanda’s Chicago project plans called for a 89-storey skyscraper, appropriately named Vista Tower, that would include 240 luxury hotel rooms, as well as apartments and commercial space. The tower broke ground at 363 E. Wacker Drive in late 2016 and was slated to open in 2020. But in January this year, the group began taking offers for its 60 percent stake in the $900 million under-construction development.

The $1.2 billion One Beverly Hills hotel and condo complex, at 9900 Wilshire Boulevard in Los Angeles County, also has had its share of issues as Wanda’s development partner, Athens Group, exited the project in October last year just before apartment sales were scheduled to begin for reason that remained unclear. The high-profile company bought the site, which was formerly home to the Robinson’s-May department store, for $420 million in 2014, according to The Real Deal.

Wanda, along other major Chinese cross-border investors such as HNA Group and Anbang Insurance, has been seeing pushback from the Chinese authorities over cross-border invesments, as China sought to stanch currency outflows. Wanda, once one of the largest owners of foreign assets, with more than $40 billion of property worldwide, has been battling to reduce its borrowings and sell off both domestic and overseas assets since last year.