Suntec REIT has sold its 30 percent stake in Swiss bank UBS’s Singapore headquarters for S$295.5 million ($220.2 million), in a transaction that puts the owners of SingHaiyi Group in full control of the recently renovated asset.

“The divestment of 9 Penang Road is part of our proactive portfolio management strategy to enhance unitholders’ value,” Chong Kee Hiong, chief executive of the trust’s manager, said in a Wednesday filing with the Singapore Exchange. “We are pleased to have realised a gain on divestment of S$66.5 million and achieved a 305 percent return on our investment.”

The trust managed by Singapore’s ARA Asset Management is selling its stake in UBS’s Orchard-area home to Haiyi Holdings, an investment firm wholly owned by Gordon Tang and wife Celine Tang at an agreed property value of S$985 million.

The Tangs are the majority shareholders in developer SingHaiyi Group, and Gordon is also the largest shareholder in Suntec REIT with a roughly 9 percent stake, according to the trust’s most recent annual report. Gordon Tang’s father, Tang Jialin, also owns about 6 percent of Suntec REIT.

In an announcement to the exchange, the SGX-listed trust said the agreed property value for the property represents a 5.7 percent premium over the latest valuation of S$931.8 million and is 30.3 percent higher than the total development cost of S$756 million. 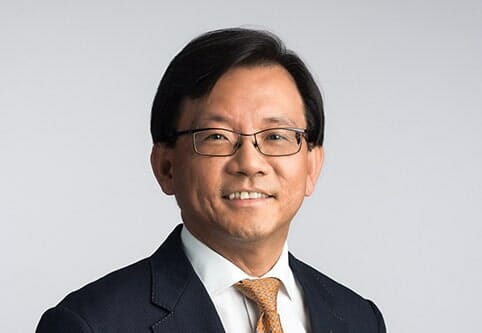 The former Park Mall site was redeveloped by a joint venture of Suntec REIT, Haiyi and SingHaiyi, with the latter two each holding a 35 percent stake in the JV before the latest transaction.

Suntec REIT had sold the twin 35 percent stakes in the Park Mall project to SingHayi and Haiyi in 2015 for an aggregate consideration of S$411.8 million. The partners then worked together to transform the structure into a premium office project, winning LEED Platinum certification from the US Green Building Council.

At the agreed consideration, Haiyi paid S$2,468 ($1,839) per square foot of net lettable area to take full control of the building.

In 2019, Celine Tang described 9 Penang Road as her company’s first foray into commercial property development, with the project meant to act as a springboard for expansion into the commercial and retail segments.

She and husband Gordon, a mysterious China-born windsurfing enthusiast turned billionaire, made headlines in May when their SingHaiyi Group led a consortium that entered the winning bid for the en bloc purchase of the Maxwell House building in the Tanjong Pagar area for S$276.8 million.

The power couple — they count George W Bush’s brother Neil as one of their closest associates — plan to leverage recent policy moves aimed at rebooting Singapore’s urban core to redevelop the 13-storey commercial complex at 20 Maxwell Road into a combined residential and commercial tower.

Suntec REIT’s manager said the proceeds from the 9 Penang Road divestment would give the trust financial flexibility to pursue growth opportunities and diversify the portfolio.

“Post divestment, Suntec REIT continues to be anchored by the resilient office segment, which will contribute more than 80 percent to the REIT’s total income contribution with Singapore properties constituting about 75 percent of our total assets under management,” Suntec REIT’s Chong said.

Outside the city-state, the trust has full or partial ownership of five commercial assets in Australia, plus a half-stake in the two-building Nova Victoria office complex in London’s West End acquired for £430.6 million ($560 million) in October 2020.