The receivers put the Goldin Financial Global Centre back on the market this week (Source: Savills)

A mysterious businessman who has been said to be in the process of buying the Goldin Financial Global Centre (GFGC) since late 2020 filed suit this week in an attempt to block the sale of the Kowloon East trophy tower by receivers.

Goldin had announced a provisional sale of the estimated HK$10 billion ($1.27 billion) asset to Fong at a HK$14.3 billion price point in October 2020, with Hundred Gain now saying that the receivers had backed out of an agreement reached later this year, and asking either that the transaction be completed or a HK$2.03 billion deposit be returned, according to local media reports.

Representatives of consulting firm Kroll, who are acting as receivers in the case, declined to comment, with market sources familiar with the transaction saying that a sale and purchase agreement with Hundred Gain had been voided after the company failed to make good on unspecified terms of the transaction.

The lawsuit was filed just one day before property consultancy Savills announced that it had been hired to market the 900,000 square foot (83,612 square metre) grade A office asset through a public tender, with market sources estimating the tower would likely sell for around HK$10 billion ($1.27 billion) once the tender closes on 21 July, 2022. 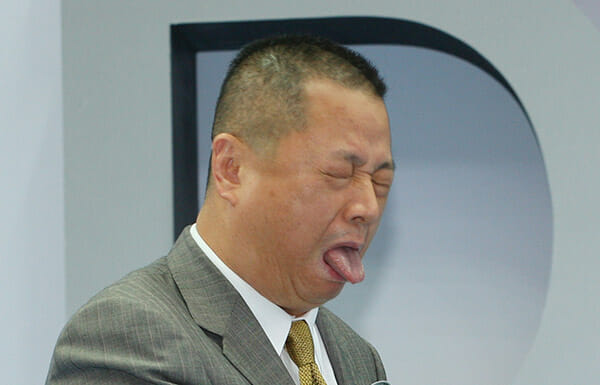 Pan Sutong seems to be gagging on the sale of his trophy tower (Source: Getty Images)

The former headquarters of the Pan Sutong-controlled developer is being sold by the same set of receivers – including Cosimo Borrelli and Simon Ma Siu Ming from New York-based risk consulting firm Kroll – who had attempted to market the asset in 2020.

Goldin Financial Holdings had informed its shareholders in a filing to the Hong Kong stock exchange in early March that on 25 February, Hundred Gain International and the receivers had already entered a new sale and purchase agreement to transfer the rights to the property at 17 Kai Cheung Road in Kowloon Bay.

Should the LEED Platinum office tower, which is reported to be 30 percent vacant, sell at its estimated value of HK$10 billion, the deal would translate to HK$10,869 per square foot of floor area, or about 16 percent less than the target price of around HK$12 billion when the same receivers had engaged Knight Frank to market the property in 2020.

Goldin, which was among score of Hong Kong-listed companies which failed to publish its 2021 annual results by the 31 March deadline, is seen as clinging to the asset that had long served as its headquarters, as a sole remaining trophy.

With chairman Pan Sutong having once been listed by Forbes as one of Asia’s richest men, the company has been struggling to liquidate assets for several years after taking on a series of grandiose projects.

In March of last year Pan transferred the rights to a residential project in Ho Man Tin to Hong Kong-listed Great Eagle after his joint venture partner, the MTR Corporation had filed a breach of contract suit over the long-delayed development.

In 2020, Goldin had sold a residential plot on Hong Kong’s former Kai Tak runway at a HK$2.6 billion loss after forfeiting a commercial site on the same strip just months earlier. And with its failure to file its audited returns in March, the company has seen its shares suspended from trading on the Hong Kong stock exchange beginning on 1 April.

In the 12 months which ended on 30 June, 2021, Goldin recorded a loss of around HK$1.39 billion, according to its latest interim report.