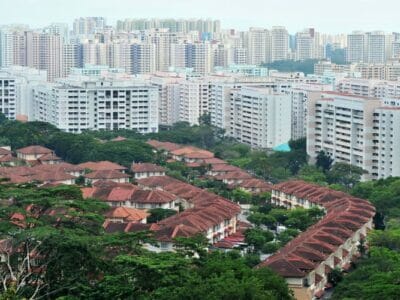 Singapore home sales lead the way in Mingtiandi’s roundup of Asia real estate headlines today after deals for new housing took a 30 percent jump, while a Chinese e-commerce giant and a large mainland developer are among the shortlisted bidders for a German retailer’s $2 billion mainland cash-and-carry business.

In other news around the region, with its former chairman serving an 18-year fraud sentence a Beijing insurer is said to be offering its New York office condo at a hefty discount, and Hong Kong investors are reported to be stepping up their home searches in Malaysia and Canada.

Elsewhere, a top executive at Hong Kong’s second largest developer says he fears the trade war more than the protests, while some cities in China have requested that buildings drop their Western names.

Sales of New Singapore Homes Up 30%

Property developers, under pressure from a substantial pipeline, pushed out nine new projects last month following a lull in April, but the bulk of last month’s sales came from earlier launches, analysts say.

Developers sold 952 units, up nearly 30 per cent from 735 units in April, but down 15 per cent from the 1,122 units booked in May last year. This is according to figures released by the Urban Redevelopment Authority (URA) yesterday. Read more>>

Eight, not four, bidders have until June 10 to lodge a non-binding bid for the cash-and-carry business Metro China, which is estimated to be worth between $1.5 and $2 billion.

With eight consortiums in the running, the price is more likely to be at the higher end of the scale. Alibaba – in partnership with Taiwanese retailer RT-Mart International – and US retail giant Walmart, which already has 400 hypermarkets in China, are also on the shortlist. Read more>>

As of May this year, 13,685 Japanese companies had a presence in China, down by 249 since 2016, when Tokyo credit research agency Teikoku Databank conducted the last survey of this kind. The 2019 tally was about 5 percent lower than the peak of 14,394 recorded in 2012. Read more>>

Anbang Insurance Group has decided to sell off another one of its pricey Manhattan properties. And this one could go at a steep discount.

The Beijing-based conglomerate has put the office condominium at 717 Fifth Avenue up for sale, according to US media accounts. Anbang, which became a poster child for China’s extreme appetite for overseas acquisitions, is shooting for a sales price north of $200 million, which could be roughly half the $415 million that the insurance giant paid for the property four years ago. Read more>>

The massive street protests triggered by the extradition bill will not have as big an impact on the city’s property market as the US-China trade war, according to a top executive of CK Asset Holdings, Hong Kong’s second largest developer.

CK Asset Holdings is the first major developer from Hong Kong to publicly comment on the impact of the extradition bill on the property market. Read more>>

Real estate agents in Vancouver have noticed something unusual in the past few weeks.

For the first time in recent memory, the number of Hong Kong Chinese attending open-house showings has exceeded that of mainland Chinese buyers, who have been a visible presence in the city’s real estate market over the past decade. Read more>>

China Orders Buildings with Western Names to be Re-christened

These days, many city dwellers across China live in the Champs-Elysees, shop in California Plaza and dine on Capitol Hill.

These have been some of the most popular names for Chinese residential and commercial buildings. But maybe not for much longer. Cities across China are starting to get rid of foreign-sounding names on buildings, roads, shopping malls and commercial centers, choosing new ones to represent Chinese culture and adhere to the requests of the Communist Party. Read more>>

An ailing mainland developer leads this week’s set of personnel moves from around Asia, as a new chairman takes over at … END_OF_DOCUMENT_TOKEN_TO_BE_REPLACED