ByteDance, the private Chinese company behind the hugely popular video chat app TikTok, is said to have acquired a failed Beijing shopping center for RMB 9 billion ($1.34 billion), with a plan to convert the facility for office use, according accounts in the local Chinese press.

The reported purchase of the Zhongkun Plaza in the capital’s Haidian district by ByteDance, which is said to be valued at $75 billion, echos a similar move by Chinese e-commerce giant JD Group a week ago, with the world’s third-largest Internet firm having purchased an aging landmark hotel in the same area of Beijing for RMB 2.68 billion.

Both JD.com and now ByteDance are turning to developing their own premises as Beijing continues to run short of office space, with the mobile app builder having stepped in after the Haidian District government had taken over Zhongkun Plaza through an official asset manager for failed projects.

ByteDance had not yet confirmed the acquisition at the time of publication.

Beijing Zhongkun Plaza, which opened nine years ago near Beijing’s Big Bell Temple, is located along the northwest portion of the capital’s third ring road at the convergence of the Xizhimen transportation hub, Zhongguancun technology park and a commercial district that includes the Beijing Asian Games village and the Beijing National Olympic Sports Center.

The 430,000 square meter shopping center was built by Beijing Zhongkun Group, a developer specialising in resort projects in 2004 at stated cost of RMB 6 billion. The group’s founder and chairman is the notorious property tycoon, poet and former Red Guard, Huang Nubo.

Huang, the now-billionaire son of a former PLA officer who took his own life in a party purge, is best known for a failed plan to build a $200 million resort and mountain park in Iceland in 2011. The proposed project was later rejected by Iceland’s Interior Ministry, saying that Zhongkun did not meet the country’s legal requirements for land sales to companies outside the European Economic Zone.

Officially opened in 2010 after a series of delays, the landmark Zhongkun Plaza has been called the last and largest mixed-use urban development within central Beijing’s third ring road. When it broke ground fifteen years ago, the shopping centre was touted as the  only large-scale commercial project directly linked with the city’s metro lines.

A Rocky Road to Development 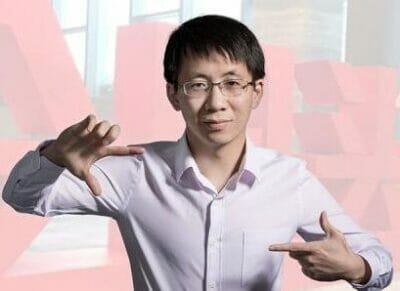 As Huang’s first attempt in commercial real estate development, Zhongkun Plaza did not prove to be easy money for the once high-profile tycoon.

Huang described the progress of the development and the challenges faced during its six-year construction timeline in an interview with a Chinese newspaper in 2011.

“(We) spent the first two years to relocate around 3,000 families in the area and then the SARS struck in 2003, all the workers had to be sent home,” Huang said. “When construction eventually took off, it was suspended once again in preparation for the 2008 Beijing Olympics. Then, 2009 brought the Asian financial crisis and most of the developers were short of cash at the time. The 60th anniversary of the establishment of People’s Republic of China later that year halted the project once again.”

At the time Huang was still positive about the future of the Zhongkun Plaza. “A self-holding commercial development adds cash pressure to a company in the short run, but its benefits will be enormous in the long run,” he was quoted as saying. “Zhongkun Plaza is now valued at RMB 80,000 per square meter. With more than 400,000 square meters, it’s already worth tens of billions.”

Despite Huang’s positive pronouncements, his Zhongkun Group decided to transform Zhongkun Plaza from a shopping complex to an office property in 2013 due to what were described in the media as management issues. With Zhongkun Group having sold shops in the plaza to individual owners on a strata-title basis, this move was resisted by more than 1,200 minor proprietors who had purchased units within the property. Zhongkun, being the majority owner of the project, went ahead with the conversion, causing a stalemate with tenants and owners of shops within the premises.

In early 2018, some of the plaza’s remaining tenants such as KFC and the Japanese multinational fast food chain Yoshinoya also terminated their leases with Zhongkun, leaving the project largely vacant. The government of Haidian district subsequently took control of the project through a division specialising in management of bad assets.

According to market watchers, the inevitable demise of the Zhongkun Plaza can be blamed primarily on Zhongkun’s ineffective management and its inability to reach a settlement with the individual title-holders within the project to buy back their proprietary rights.

On January 18th, the Haidian District People’s Government successfully completed the asset reorganization  of Zhongkun Plaza — a move which paved the way for the property’s sale to the world’s most valuable startup.

Despite its status as the world’s most valuable startup, seven-year-old Bytedance has so far not had a dedicated headquarters to house its 10,000-strong workforce. Now, Zhongkun Plaza, or at least the site of the project, will reportedly be used as the company’s new office location.

With Grade A office vacancy levels in Beijing’s Zhongguancun area declining by 0.3 percentage points to 0.6 percent during the third quarter of 2018, according to a recent report by Savills, the shortage of office space in the capital’s tech hub is forcing the city’s leading online firms to start making their own buildings.

Earlier this month, Chinese e-commerce giant JD Group bought the legendary Beijing Jade Palace Hotel for RMB2.68 billion ($396 million), with the world’s third-largest Internet firm saying that it plans to convert the facility for business and R&D use.