China’s southern tech hub of Shenzhen, a leading player in China’s attempt to make the Greater Bay Area a regional economic powerhouse, is about to boost its supply of office building space by one-third amid a steep drop in tenant demand.

More than half a million square metres of grade A offices were added to the city of 12.5 million people in 2019, with only just over 100,000 square metres (1.1 million square feet) getting matched up with tenants, according to Cushman & Wakefield’s latest report on the city just across the border from Hong Kong.

The mismatch between supply and demand has created a glut of empty commercial floors in Shenzhen that is on its way to getting worse, according to C&W’s analysis. The agency’s prediction comes after the amount of grade A office space leased in Shenzhen last year plunged 70 percent from the 2018 total, as companies reined in their expansion efforts in the face of a softening economy.

With the quantity of new buildings being opened on the upswing, and tenant demand on the slide, Shenzhen landlords have begun lowering rents to land new deals.

Citywide rents slid 3.9 percent for the fourth quarter of 2019, but the picture in the city’s core business areas showed the extent of the problem. 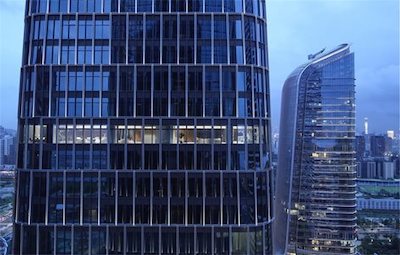 Futian district, which is home to Shenzhen’s government offices and hosts smartphone maker Oppo’s One Plus unit, saw rents driven down to an average RMB 267.99 per square metre per month in the fourth quarter, a drop of 13 percent compared with the same period in 2018.

Nanshan district, which includes the Qianhai special economic area and houses the headquarters of Tencent and ZTE, saw grade A office rents slide 8 percent in the fourth quarter, compared to the same period in 2018, to finish the year at an average of 220.75 per square metre per month.

Cushman & Wakefield attributed the city’s office market situation in part to falling demand from tech and finance firms in the face of tighter liquidity and slower economic growth.

Only three major leasing deals were transacted in the fourth quarter, according to the property services firm, with all of them involving tenants relocating into downsized premises at lower rents.

With companies shelving expansion plans, Shenzhen’s bumper crop of new buildings is boosting vacancy levels, which were on the rise in 2019.

In Nanshan, where five new buildings were added in 2019, the vacancy rate in the city’s biggest tech hub climbed to 29 percent — up from 20 percent in the fourth quarter of 2018.

“Some projects may postpone due to construction delays and the market downturn, yet the foreseeable large volume of future supply will still intensify market competition between landlords amid softened demand in the short term,” the authors of the report noted.