US private equity giant The Carlyle Group is reshaping its real estate team as the company seeks to ramp up its property investments in China. Jason Lee, Carlyle’s head of Asia real estate, will soon step down, according to a Bloomberg account citing unnamed sources.

Lee, who is based in Hong Kong, joined Carlyle’s US Real Estate Group in 1996 and launched the firm’s Asia real estate business in 2001. Following his exit, the remaining team will report to Yang Xiangdong, executive managing director and chairman of Carlyle Asia. Also known as “XD,” Yang oversees the company’s investments in the Asia region excluding Japan.

Adam Metz, head of international real estate based in Washington, DC is also said to have recently left the the company. The leadership shake-up comes as Glenn Youngkin and Kewsong Lee, who took the reins as co-chief executive officers of Carlyle Group at the start of this year, look to sharpen the focus of the Asia property business on China, according to a source that spoke with Bloomberg.

NASDAQ-listed Carlyle has $195 billion in total assets under management, including $18 billion in real estate assets, primarily in the US and Europe. It is not clear how Jason Lee’s reported exit will impact the firm’s Asia property strategy. In August 2016, Lee told Reuters that Carlyle would focus its Asia real estate investments on logistics and office projects in China, naming Beijing and Shanghai as targets for office deals.

At the time, the company was reported to have invested in more than $6 billion of property assets across Asia Pacific.

Carlyle has been active in China’s property sector since at least 2012, when it partnered with CLSA Capital Partners to buy the Hong Jia commercial tower in Shanghai for a reported RMB 1.8 billion. The duo later sold the tower to Hong Kong-listed Yuexiu REIT for RMB 2.63 billion ($423 million) in August 2015.

In 2013, Carlyle paid $266 million to buy the Central Plaza office tower in Shanghai, which China Vanke reportedly planned to purchase three years later for RMB 2.46 billion ($368.9 million). The US firm also scooped up a minority stake in shopping malls in Suzhou and Hangzhou in the same year, and purchased an 80 percent stake in a portfolio of nine commercial projects from China Vanke in 2014.

In addition to its office and retail trades, Carlyle has tapping into China’s booming logistics sector by teaming up with US investment management firm The Townsend Group in 2013 to back warehouse builder Shanghai Yupei Group in a $200 million deal. The mainland firm went public in Hong Kong in July 2016, raising about $460 million as China Logistics Property Holdings. 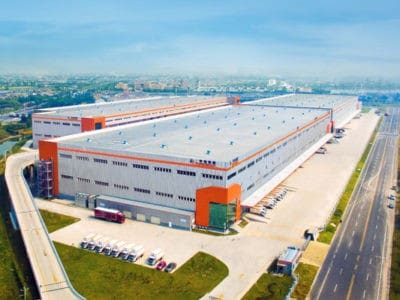 Since October 2016, Carlyle has been investing via Carlyle China Realty, a $120 million value-add closed-end fund. The company has also committed to two Asia-focussed vehicles that managed around $9.8 billion of total assets including office towers in Tokyo and Seoul.

The company hired private equity veteran Wanlin Liu from Goldman Sachs to lead the team focussed on buyout and growth opportunities in China last December. Liu is based in Shanghai as managing director with Carlyle Asia’s private equity team.